Fossil fuels are still preferred by most of the people while lot of work has been done on alternative fuel efficient cars. Hybrids also could not achieve much success although you can achieve high mileage on them. But now you require just 1 liter of petrol while traveling from Peshawar to Karachi.

The students of University Laval from Quebec designed the prototype of this car which has also won this year’s top prize at Shell Eco-marathon Americas.

This prize winner car can attain the distance of 2713 miles per gallon (1153.5 km per liter) of petrol. Laval used various types of fuels including petrol and hydrogen fuel cells in order to increase efficiency of this prototype. The car was tested in the USA’s Cetroit, Michigan test track.

Last year, students of the same university won the first prize by designing the prototype with the ability to travel 2585 miles per gallon (1099 km per litre). 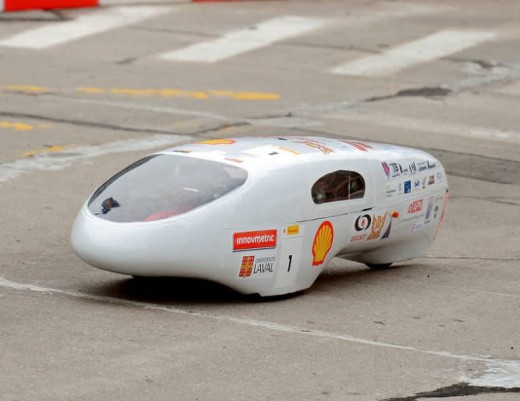 This car is powerful (regarding its body), lightweight and aerodynamic while its horsepower of 2 can achieve the speed of 14 km to 32 km/hr.

Total 1200 participants appeared in this 11th Eco-marathon by Shell while the competition was expanded in several categories which include hydrogen fuel cell, internal combustion and fully electric.

But as compared to winner of 2015 winner, this protype is less fuel efficient as that black cone-shaped car by University of Toronto was capable of 3421 miles per gallon (1454.5 km per litre).