Everyone liked the interesting semi final match of cricket world cup between New Zealand and South Africa and Bollywood star Aamir Khan could not remained silent on New Zealand’s victory but instead of praising them, he himself took the Indian team to final and announced the defeat of New Zealand in the final match.

Cricket world cup has spelled the whole world at the moment which is also a favorite game in India like Pakistan. That’s why, Bollywood actor Aamir Khan not only supported his team before the semi final between Australia and India but he also announced them to be the winner of this world cup.

Aamir Khan said at the social media website Twitter that Kiwi batsman Grant Elliott performed superbly against South Africa and now New Zealand has reached the final but its defeat at the hands of India is quite evident in the final match.

It should be cleared that the 2nd semi final match of cricket world cup 2015 in ongoing in Sydney between Australia and India today. 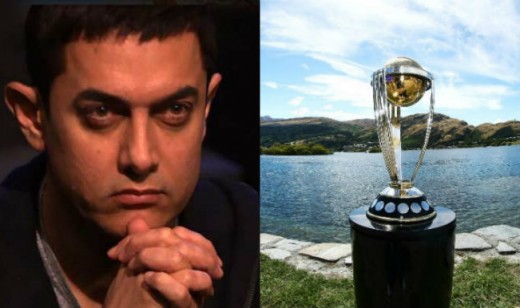