Bollywood, The video of the qawwali ‘Bhar do Jholi Meri’ recorded in the voice of Adnan Sami has been released. This qawwali has been recorded for the new action, romantic Bollywood movie, Bajrangi Bhaijaan of the dabang hero, Salman Khan of Bollywood. Preetam has composed the music of the qawwali, ‘Bhar Do Jholi Meri’ and in this movie, the viewers will see Salman Khan in the role of hero and he will be in action. He will also be looked in the role of the guard of the little Pakistani girl. Kabir Khan is the director of the movie and the story of the movie is moving around a Pakistan girl, who lost her parents in India and iot becomes impossible for her to go back without support of anyone. 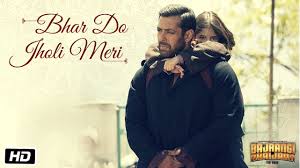 Bajrangi Bhaijaan mean Salman Khan becomes the guard of this little child and he is activated to return her to Pakistan safely to her parents. In this movie, Kareena Kapoor and Nawazuddin Siddiqui are performing the main role in this movie along with Salman Khan. This movie will be released on the cinema houses across the world on this Eid.: