During the filming of a reality TV show on Monday in Arentina, two helicopters collided which caused the death of 10 people while there were also 3 French sports stars among them including boxer Alexis Vastine, Olympic swimmer Camille Muffat and yachtswoman Florence Arthaud. 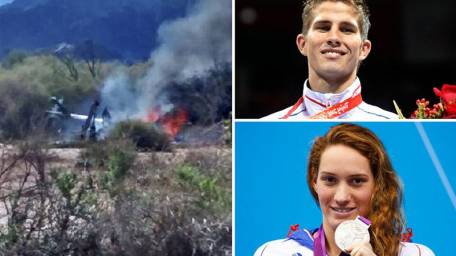 The accident was happened in the rugged area of western province La Rioja near the famous Andes mountains while authorities are not sure about the reason of this collision.

According to French media, the Argentinean sources told that the helicopters clashed around 8 pm local time while they were flying at the height of 100 meters under clear skies.

An amateur Footage shows that several people rushed towards the burning helicopters after their collision and fall.

In a statement by the office of French President Francois Hollande, it is said that the whole nation is mourning after the sudden death of their fellow French nationals.

The officials said that pilots of both helicopters and several members of ALP TV production were also among the dead. This company is filming the adventure show “Dropped” for a private TV station TF1.

According to the French media, other contestants were standing few hundred meters away from the path of helicopters during the collision. They ran to extinguish fire after the collision but could not do so.

French junior minister of sports Thierry Braillard said that the loss of three champions is a day of mourning for the whole nation.

He further said that Florence Arthaud was the ‘Fiance of the Atlantic’, the name given to her during her world record performance in 1990.

To the family of victims, TF1 issued a solidarity statement while French media said that the filming has been halted and the members of TF1 are coming to France.

TF1 chief executive Nonce Paolini said that they have no details about the accident at this moment and they are very upset with this situation.

In the reality show “Dropped”, the participants have to find their way themselves back to the civilization after being left in the wilds.

This collision was the second tragedy in two years for the reality show produced by ALP for TF1. In April 2013, one of the competitors died after heart pain complaints and later the doctor responsible to look after the contestants committed suicide.

Top level sailor Arthaud (57) was also close to death in 2011 when her boat fell down in the Mediterranean and she was later rescued after calling her mother on mobile phone.

English Premier League ex-footballer Sylvain Wiltord was also the cast member of the show who tweeted that he is sad and horrified for what has happened to his friends.

La Rioja’s security chief Cesar Angulo said that two pilots of the helicopters were also among the victims and no one could escape the accident.

According to Telam, the official news agency of Argentina, one helicopter belonged to the provincial govt. while the owners of the other one were the organizers of a survival competition.