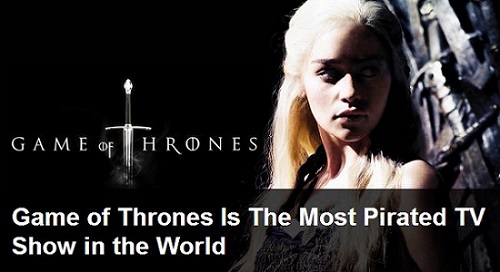 Game of Thrones maintains its position as it is the most pirated tv show of the year. It is revealed that 7th season of Game of Thrones was pirated over billions of times. The tv show gained the record breaking ratings and it faced piracy and hacking attempts and it leaks the wonderful numbers.

HBO has been plagued by the security breaches through the latest season and we have seen through the some episodes leak before the broadcast and it is added to unlicensed activity.

The season 7 of the tv series brought the tears and joy to the viewers and it gained the viewership in large number through the unauthorized streaming services. There is small amount of viewership through the torrent and direct downloads. The pirate viewership can be broken down in different categories, which are as follow:

An episode of this tv show was pirated 140 million times on the average and it had only 32 million views through the legal channels. The data shows that need for right holders to change their focus from controlling torrent traffic to unauthorized streaming.

MUSO collected the data and it covers thousands of popular websites to control traffic and it does not cover them all. MUSO claims that the season had over one billion download and the company has not covered the entire pirate landscape. The Chinese traffic is active in piracy and they do not consider in the calculated statistics. The pirate sources like fully loaded Kodi boxes are not included in it.

The viewers can watch the breakdown of viewership, streaming and downloading the Game of Thrones episodes and they can check though the reliable statistics.