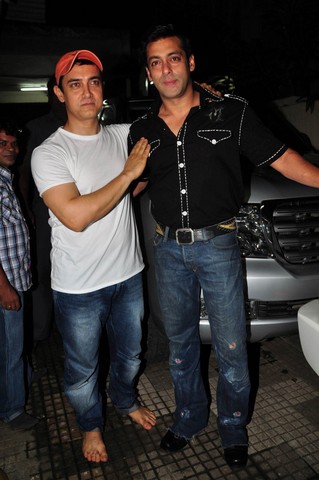 Mumbai, There are some rumors about the friendship break up between Salman Khan and Aamir khan. according to the website, Aamer Khan managed a party in his home located in Bandra, Mumbai, in which he invited very close friends including Salman Khan. when the party was started, Aamir khan took the mike and he starting appreciating the movie, ‘Bajrangi Bhaijaan’. He said emotionally that Salman Khan performed well in this movie and he never did so well. He added that there are huge numbers of movies in account of Salman Khan but he did not look so much maturity, which he noticed in his latest movie. He said that he did not take the script and story of the movie easy. But unfortunately, Salman Khan did not like his comments on his movie and he criticized Aamer Khan that he did not work hard like Aamir khan but he could give credit to his directors and writers, who worked hard and his movies became successful.

According to the information, when Salman Khan said so, then there were tear in the eyes of Aamir khan and Salman Khan left the party with his words, ‘fake’ to Aamir khan. There are some rumors in the corridors of Bollywood film industry that the stories of movies of both actors were same. Aamer Khan is going to perform in the movie, ‘Dangal’ and Salman is going to work in the movie, ‘Sultan’ and the stories of both the movies are common.