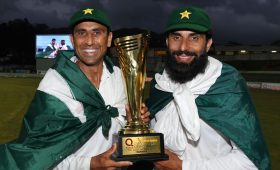 Lahore, Misbah ul Haq and Younis Khan played the final test series against West Indies and both the players have been retired from the international test cricket. Shahid Khan Afridi is also hero of Pakistani cricket team and he has also announced his retirement from international cricket. Pakistan Cricket Board is making the arrangements for the farewell ceremony for these recently retired cricketers. It is expected that the farewell ceremony will be awarded to these players on 25 May.