The Interior Minister of Pakistan, Chaudhary Nisar Ali Khan directed on Monday to NADRA to establish the centralized digital databank to issue the visa to all of the foreigners through Pakistani missions all over the world.

He said that they have developed the mechanism and it would help the foreigners to get visa online for any category of visas to travel to Pakistan. This system will bring the transparency and clarity in the new visa system for Pakistan. The Interior Minister chaired the high level meeting and there are some other attendants of the meeting, who are Secretary Interior, Chairman NADRA, Director General Air Wing and senior officers from the Ministry of Interior.

The Interior Minister also said that the central digital databank of visa appointment and visa issuance mechanism will give the help to state so that they can keep a check on all visiting people to the country. It is necessary to mention that Interior Minister Chaudhary Nisar Ali Khan issued the directions and the letter is written by the office of the Prime Minister during the previous government authorities and they gave authorization to the ambassador in US to issue visas with the approval getting from Islamabad, which was drawn in 2014. The interior minister added that the concerned authority should keep the whole process more transparent. He said that a lot of work has been done during last three years and it is ensured that no alien should enter Pakistan without getting proper documents and visas, which should be duly verified before issue of visa. 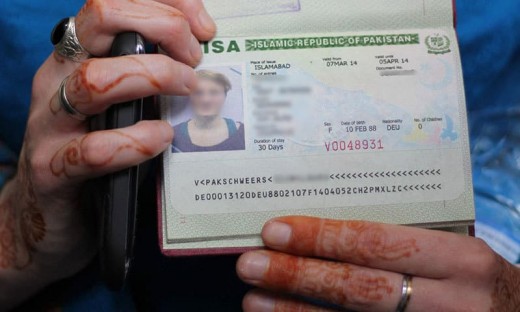 He gave orders to NADRA to develop the online system for issue of visas and everything will come on the record and the authority should ensure that there will be no irregularity. The meeting also discussed the matter pertaining to future of Air Wing Post 2017 of Ministry of Interior. The honorable minister further added that Air cover of Ministry of Interior for the fight against militancy, terrorism, extremism and drug peddlers in the sensitive area across Pak-Afghan border and especially in Baluchistan and it is the great support for the security forces in this respect.

The interior minister also directed NADRA to prepare new rules and regulations to infuse transparency for hiring private contractors since the public money is not collected to give favor to the contractor mafia. The interior minister said that NADRA should approach to the provincial governments to purchase the land to establish their offices on the government rates. The honorable minister gave one week deadline to NADRA to put up the proposal in regards to establish the rules and regulations for contractors and settle their rates for the construction and renovation works.

He said that they should look at the financial wrong doings of the past to purchase the land and building on the rent purpose and NADRA should stop such practice for good.

NADRA has developed a software company, National Technology Limited and now it was closed down on the orders of the Interior Minister. The honorable minister said that NTL was the source of financial misappropriation and it has been closed down due to plug the financial bungling. He further added that due to closure of NTL, the international commitments of NADRA would not be effected as the requisite amendments have be done to address the international obligations of NADRA and the contracts are made with foreign institutions and countries.