After defeating West Indies by 6 wickets, Pakistan is leading the 4 match T20 series against West Indies 1-0.

The venue of the match is Kensington Oval Ground in which Pakistan won the toss and decided to field first. West Indies could only manage to score 111 runs for the loss of 8 wickets while Pakistan lost 4 wickets and achieved the target in 17.1 overs. Pakistani innings was stated by Ahmed Shehzad and Kamran Akmal. Ahmed Shehzad scored 13 and lost his wicket at 25 while Kamran Akmal scored 22 runs. Babar Azam and M Hafeez scored 29 and 5 runs respectively.

Shoaib Malik (38) and captain Sarfraz Ahmed (4) remained unbeaten after scoring 20 runs for the 5th wicket partnership through which the target was achieved in 17.1 overs. 2 wickets were taken by Jason Holder while C Braithwaite and S Badree took 1 wicket each. Shadab Khan achieved ‘man of the match’ award.

Lewis and Walton were openers for West Indies. Lewis got run out after scoring 10 runs while the other batsmen that could not score much include Samuels (7), Walton (18), K Pollard (18), R Powell (5), L Simmons (01) and S Narine (1). Captain Brathwaite hit 2 sixes and 2 fours and scored highest 34 runs in 27 balls.

From Pakistan bowling side, the highest wicket taker was Shadab Khan who took 3 wickets while Sohail Tanvir, Wahab Riaz, Hasan Ali and Imad Wasim took 1 wicket each. Kamran Akmal returned to national team after 3 years through this match while Shadab Khan debuted his international career with the match. 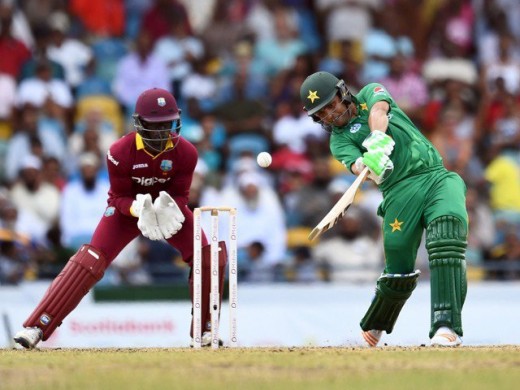