This movie lacks creativity according to me, sense of humor is not very appealing. Other thing that I want to add is that people’s getup is not what was supposed to be, starting from the villain calling himself a Mandarin is a man of Mystic and science, he is and arabesque molded in Bin Laden’s get-up. 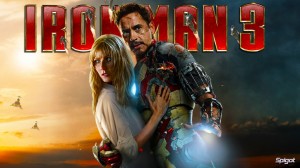 The role of villain is done by Ben Kingsley with a half messy beard and is capable of skyjacking international TV with terrorist and increasing the grief of under-privileged childrens.

In the previous versions of the Iron Man, the villain were not up to the mark, Mr. Kingsley could have come with a better idea. The reasons for that could be that in one movie he performed role of Gandhi and he is considered anti American.
The villain role is sustained by Kingsley until Robert Downey Jr is introduced by the Directors to nightmare and various attacks, especially when New York is mentioned by someone or blue-worm holes in the sky.
It was expected that Mr. Downey, finally gives a chance to Tony Starks. Mr. Downey’s genius reduces Toney’s post avenger psychological research and a smidge of character’s wit.

The mental state of Toney is interrupted with inter-connected to the main idea of scientific breakthrough also called Extremis. The old fame scientist in the movie (Rebecca Hall) came up with an idea of making a rejuvenated crippled limb that can resist the side effects of the drug’s by the enemies.
Kingsley is backed by corporate villain who is a scientist as well Aldrich Killian, the owner of Idea Mechanics. A brief play made for the Pepper Potts (Gweyenth Paltrow) who is the CEO of start industries and Toney’s only sincere squeeze.
The screen play of Mr. Black and Mr. Pearce is considered to be oversupplied of materials. This extremis angle is taken from a comic arc by writer Warren Ellis and Adi Granov (An Artist).

Similar to Tony there is a self-aware growth in Iron Man armor’s which is the part of design and of comic book mythos.
There are no surprises regarding the ace representing Iron Man 3 with evenly spaced, pricy and set-pieces, one of them having a slow motion which is fantasy to watch, the other represents mid-air rescue(Air Force) the climatic brawl is between Iron Man proxies and agents of AIM.
Iron Man lost is not as good as the movie “The Avenger” which is very exciting like the other two movies which are my favorite, Bygones be bygones and Just Accept the After-Taste