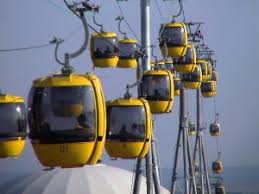 People in Lahore will now be able to travel through Lahore using chairlifts. According to an announcement by CM Punjab Shahbaz Sharif, a ropeway transport system will soon start in the city.
CM has ordered the preparation of the feasibility study as the project is currently in its planning stage. For this chairlift system, the authority is considering three main routes of Lahore for this system.
Jehangir Tomb to Greater Iqbal Park
Jalo Mor to Thokar Niaz Baig
Imamia Colony to Railway Station
The authority is also considering the construction of Islamabad to Murree ropeway system along with the one in Lahore. If it becomes reality, then you can travel from Islamabad to Murree via chairlift that will help you get a scenic view.
The project was discussed in a meeting headed by CM Punjab while the other attendees were provincial ministers Mujtaba Shuja ur Rehman and Ch Sher Ali, secretaries environment and transport, Commissioner Lahore Division and MD Punjab mass transit authority.
According to CM, an international company will be working with the Punjab Govt. and the ropeway transport project has been finalized by this company.