After the success of his movie Bajrangi Bhaijaan Kabir Khan revealed the primary look posters of his upcoming movie Phantom which is a counter terrorism drama movie, in this movie it is featuring Sail Ali Khan and Katrina Kaif in the leading role. On the 25th of July the trailer of this movie is going to be revealed.

The movie is produced by Sajid Nadiadwala’s production house Nadiadwala Grandson Entertainment, the movie is mentioned to be made regarding the situation post 26/11 attacks in Mumbai and worldwide terrorism. The movie has gained the U/A certificate from the Central Board of Film Certification (CBFS)

As well the production house bring out another poster to unveil the exact date for the trailer release. In the tweet mentioned, “4 Countries. 1 Man. A story you wish were true, coming on Aug 28 to a cinema near you. #PhantomTrailer25July”.

In the recently displayed posters, Saif and Katrina are both blindfolded along with what appears like the Indian tricolor and the tagline reads ‘A story you wish were true’.

Actually this is 2nd time that Katrina working along with Saif Ali Khan and Kabir Khan as she previously worked with him in hit movie ‘Race’ in 2008 and as well the director in ‘New York’.

As per to the crime author Hussain Zaidi’s novel ‘Mumbai Avengers’, ‘Phantom’ is planned to come out on August 28. 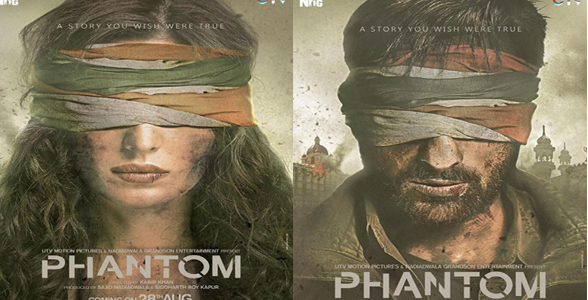