In the memory of late Abdul Sattar Edhi, the design of Commemorative Coin has been introduced by State Bank of Pakistan (SBP). The coin will be available to public after its release on 31st March 2017.

According to reports, Federal Government has decided to pay tribute to humanitarian services of late Abdul Sattar Edhi for humanity in Pakistan and elsewhere by issuing a Commemorative Coin in his memory.

Later, it was made authorize for State bank to issue Commemorative Coin of Rs. 50 in the memory of late humanitarian. From March 31, the exchange counters of all the field officers of SBP Banking Services Corporation will issue these coins. 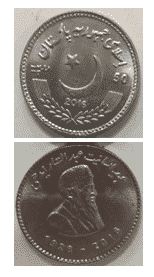 Following is the metal composition, dimension and weight of the coin.