Student Got Prize of 25 Million Rupees

Manila, A girl student of a local college in Philippines has made a video describing the Theory of Relativity of Einstein in very simple words. Her video has been awarded with the prize of 25 million rupees. Albert Einstein has presented his ‘Theory of Relativity’ in two different research theses in 1905 and 1915.

The competition was managed under the ‘2017 Break Through Junior College Challenge’ to make such videos, which can have the duration less than three minutes and the complicated ideas of science and mathematics have been described in good style. In this competition, Diyan Andelles has made the interesting video in simple way that the ‘Theory of Relativity’ and ‘Frame of Reference’ are equal. In the start of the video, the digit 9 is shown and the two viewers come from opposite sides and they declare it different. One says that it is 6 and the other says that it is 9. It means when you change your head, the digit is also changed.

In the middle of the video, Diyan comes and she says which of the place or reference you use, the fact is also changed. In Physics, it is called frame of reference. 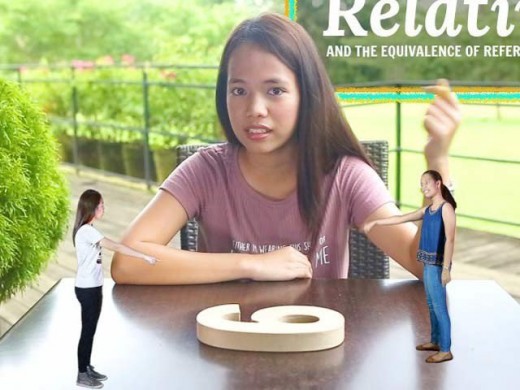 In another experiment, the three friends of Diyan noted the sound of horn of a travelling car at the different places. One friend was standing at the front side of the car, the other was standing at the rear side of the car while the third one was sitting in the car and they recorded the sound of the horn of the car. Due to change in position of the friends, they received different type of sound of the horn on the every frame of reference. At some position, the pitch of the sound was noted very high or the sound is spread as the pitch of the sound was very low. According to Diyan, this test can be done for the directional speed or the velocity and time.

She says if Usain Bolt runs with the 98% of the velocity of light then the ten seconds of Usain Bolt were equal to 40 seconds by the watch of the judge present outside. Millions of people have watched this video till now and they are admiring the simplicity of this video through which the most complicated ‘Theory of Relativity’ has been taught. You can spend only 2 minutes and 30 seconds and watch the unique video of Diyan.