Home Celebrities Talk Show Host Tried to Prank SRK but his Response was not Good
imran+ Jun 8th, 2017 Comments Off 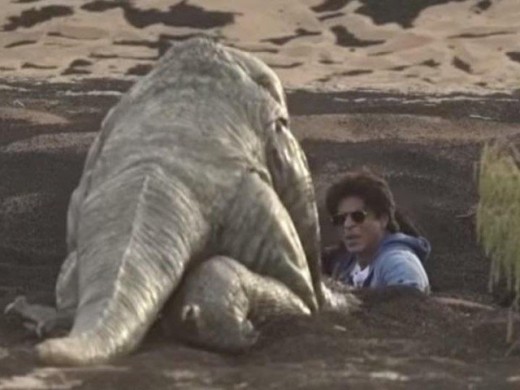 The Bollywood star, Shah Rukh Khan faced an untoward incident when the Egyptian comedian and host of Ramez Underground, Ramez Galal pranked him on his show. The actor was not amused on this prank and it came really close to punch Galal.
Shah Rukh Khan was busy in the shooting in the deserts of Dubai with TV presenter, Nishan and he also became the victim of this prank. Ramez put on the Komodo dragon costume and he came close to them to hiss to SRK and others. Shah Rukh Khan tried to splash some sand at him and after some time of torture, Ramez moved his mask and showed that it was all a prank. SRK did not take it sportingly and he showed his anger to Ramez by saying that all this was the nonsense.
Ramez apologized to the actor several times but SRK told him not to speak with him and he asked him team to be called. When Ramez continued talking and apologize, then SRK pushed him on the ground and blew his fist on his face. Then he went on to drag him on the ground by his leg. When Ramez felt that SRK is still angry, he started singing Marjani Marjani of the movie, Billu Barbar of the actor. Then Shah Rukh let out a smile and went to his car without accepting his apology.

The comedian posted the selfie with SRK on twitter and it cannot be said that this selfie was taken before or after the prank. It is finally noticed that Shah Rukh Khan is still very angry at him. It was said that the response of Shah Rukh Khan was staged and he did put up the great act in this way.